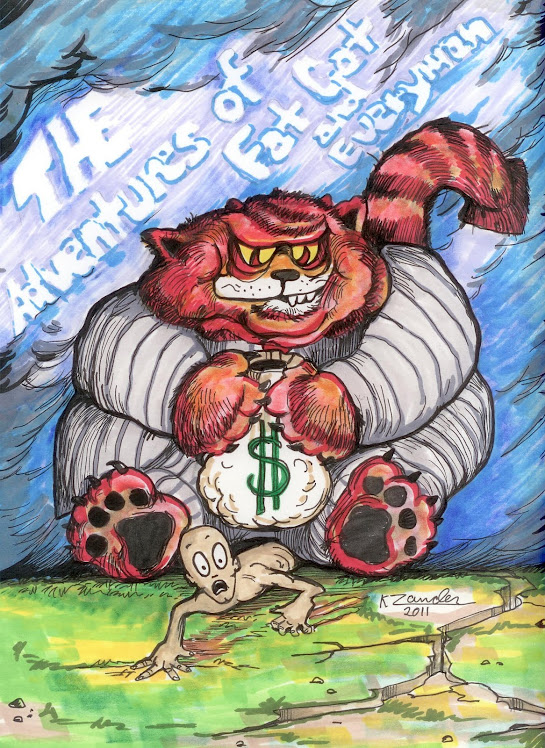 The Fat Cat Has Sung 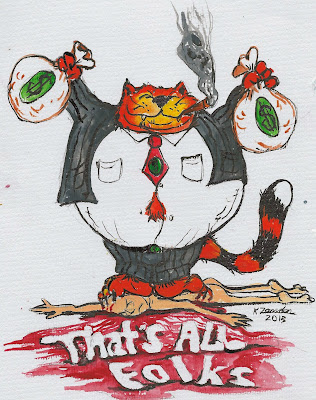 All things, including this blog, must come to an end. It was fun pontificating my liberal views. It was enjoyable seeing people from all over the world access it. But as much fun as it was there were drawbacks. The alarming thing about venting your political frustrations is as you take in the whole picture you realize how much ignorance hatred and prejudice govern our country. We are truly a nation at the end of it's greatness. Greed is now the number one factor driving the country down. Stupidity, a close second, has taken over a huge part of the electorate, like a zombie virus. They mindlessly believe hate filled propaganda passing for news on right wing television and radio. We've shipped all our good manufacturing jobs to lowest bidder Communist nations, so fat cats can get fatter. Dumb has become the new smart and America is soon to become a third world nation.
Posted by Everyman at 7:58 AM No comments:

Not My Planet Anymore 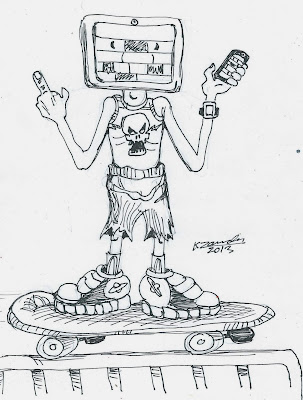 The older I get the more I realize, the planet I live on, is no longer recognizable to me any longer. When you are young and your brain is new, every second is a miracle. As you age life scratches and scores your brain and fills the ruts with unnecessary garbage. Childhood is a time of life to be cherished. This is no longer so. Just look at the wrecking ball accident the media has created to by-pass childhood and turn kids into insane little adults. When I grew up a woman's navel wasn't allowed to be shown on T.V.. The 1960's were the golden age of comics. Now the only movies made today are comics. Back in the day directors used adults who could act.All you see in today's infantile jokes that pass for movies ,are pretty faces with empty heads spouting the F word for dialog. Special effects, in the old days, were done by masters such as Willis O'brien and Ray Harryhausen. Now special effects,which are the whole movie, are done by kids on computers. Kids burn up their childhoods now playing video games texting, and sending obscene photo's of themselves or they are herded into organized sports by jaded parents who swallow hook line and sinker everything some bubble head in the media feeds them and people shake their heads when some teen commits suicide after being bullied to death on the internet.
Posted by Everyman at 12:29 PM No comments:

In Order To Form A More Perfect Union 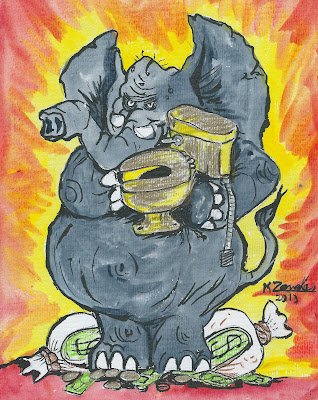 To me, unions, are the last glimmer of hope for the American worker. I was fortunate enough to belong to the letter carriers union for over 30 years, and now retired am still a member. What did I get from this collaboration?I worked for a decent livable wage in a work place where management couldn't rule with iron fist tactics. I had paid vacation times as well as paid holidays. I had accumulating sick days, and when I was off work for three months because I broke my back, I received a paycheck. I have health insurance a percentage of which is paid for. I got to retire in my late 50's. I now receive a livable pension. All of this was a direct benefit of the negotiating hard fought battles by my union. This is how the American workplace should operate. Non union workers are at the mercy of the whims of their so called beneficent job creator. The unions in this country are under constant attack by politicians trying to take the country back to the days of the robber barons and no child labor laws. Think this is an exaggeration, just look at N.A.F.T.A. or bubble headed Republicans calling for an end to the minimum wage.Look at how Republicans passed a law in 2006 that is now bankrupting the postal system. These type trade agreements and pieces of legislation are meant to destroy unions and allow C.E.O.'s to decorate their multiple mansions with golden toilets.We are now negotiating with low wage countries,including Vietnam, a country that took 58000 American lives, to ship more jobs out of our country so the rich can get richer and the poor can have access to more inferior unsafe products like the dog food shutting down the kidneys of America's dog population.Americans need to stop listening to the shills for the rich on radio and television. These blow hard's sow only hate and reap huge profits promoting policies that send American jobs to the Communist Chinese. Want America to work again? Vote all government hating, people disdaining Republicans out of office.
Posted by Everyman at 4:15 AM No comments:

The Simply Poor Versus The Deluded Poor 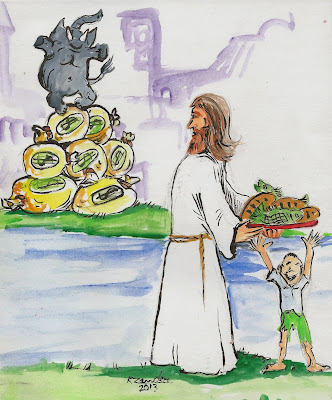 The poor will always be with us, but now they have been divided into two camps. One faction consists of the struggling everyman and the other camp is populated by poor people easily misled by pernicious right wing propaganda that appeals to their prejudiced world view. These deluded poor vote against their own self interests by voting in Republican politicians who actually redistribute America's wealth from those in most need to those needing golden shower curtains or 400 dollar bottles of wine to impress their contemporaries.Yes Republican lawmakers will vote to cut 40 billion dollars in food stamps and then vote to keep the 40 billion dollar taxpayer financed subsidy to the richest corporations in the world , the oil and gas industry.The deluded poor find this righteous because some puffy haired preacher spouting made up gospels of prosperity says God wants the rich to keep on being gluttonous at the expense of everyone else. The simply poor, who are not fooled by mega church pastors driving luxury bling mobiles, are hoping the deluded poor will realize that Jesus implied that whatever was done to or for the least of his flock was done to Him. I think most people believe what Jesus taught about it being harder for a rich man to enter the kingdom of heaven than it is for a camel to pass through the eye of a needle is the true reality.After all what benefit is it to gain the whole world and loose your immortal soul?
Posted by Everyman at 4:31 AM No comments:

The Un-affordable We Don't Care Act 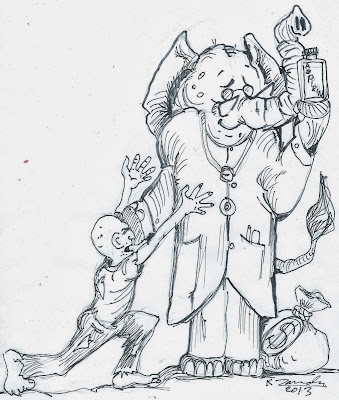 Do you remember the health care systems under president Bush, and his Republican majority in both houses of Congress? No? For people who couldn't afford health insurance it was hoping Doctors Without Borders would come to your state once a year. Now after 40 something attempts to keep poor people from health care and screaming the A.C.A. was the worst thing since slavery, the savior of the rich Paul Ryan, is going to pull a rabbit out the hat in the form of the Republican alternative. Wanna bet it's the same old rehash of vouchers and medical savings account again? The same old screw the poor and reward the rich bullshit. The only law Republican politicians are enamored with is their version of the law of the jungle. You know only the rich survive. Hey Republicans why not take advantage of the mental health provisions in the A.C.A. and be tested to see if your lust for money can be treated with a compassion pill.While your at it have your unquenchable hatred of America's first African American president checked out. Who knows, maybe under your We Don't Care Act they'll bring back pre-frontal lobotomies.
Posted by Everyman at 7:44 AM No comments:

What A Big Ham I AM 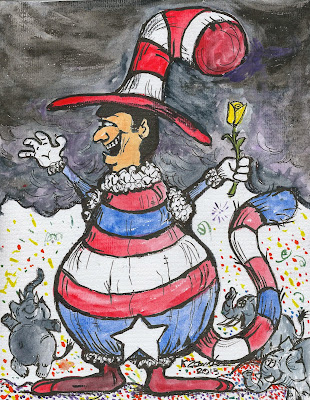 The world is 10,000 years old. This is my belief.Everyone I hang around with agree, much to my relief.Man has dominion over the Earth and it's beast's.Global warming's a myth. So fire up the grill and let us all feast. If you can't afford health insurance that;s really too bad. Don't expect me to start crying and be very sad. Birth control is a sin you must surely agree. Crank out those babies and set your soul free.The Civil War never ended, it goes on and on.Vote against your self interest, your just a dumb pawn. The old testament and phony prosperity gospels are what I believe in.If you don't believe the way I do you are part devil's kin. The president is from Kenya this we all surely know. Impeach him for no reason, he just has to go. To my ignorant followers there are no such thing as facts. We just live in a right wing bubble, it's intelligence they lack.
Posted by Everyman at 4:17 AM No comments:

The War of Southern Agression 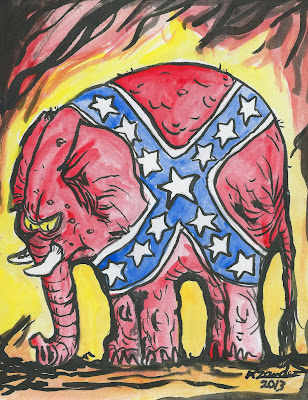 Confederate politicians from the South and West are constantly referring to the Civil War as the war of Northern aggression. The refusal to move on from a loss suffered 150 years ago is causing America it's standing the world view and is just plain crazy.Playing on this ancestral bitterness and the inability to look beyond the right wing moronic propaganda that feeds and nurtures their stunted belief systems they elect politicians of the lowest common denominator.They deny any scientific facts such as evolution global warming or the true age of the Earth. Some actually believe the president of the United States is a Muslim who was born in Africa. They shut down the American government better than any terrorist organization ever could. They have no qualms accepting federal aid for disasters in Southern or Western states, but wanted to deny aid to New York after it was devastated by hurricane Sandy. Now they are about to lead a Stalinist purge of Republican members who dared vote to keep America from collapse. They hate the idea of health insurance for the poor, because obviously they hate poor people. Hey you Confederate wanna bees, you are free to vote against your own self interests but these mean spirited right wing government destroyers you keep sending to congress are ruining this once proud country.Go ahead and keep whistling Dixie but don't expect Northerners to dance to banjo players from the movie Deliverance.
Posted by Everyman at 3:57 AM No comments: